Much Ado
About Nothing

One of Shakespeare's most adamant bachelors, Benedick doth protest too much about his own certainty that he will never meet such an ignominious fate as to fall for a woman's wiles.

Benedick wanders and wonders to himself how, although many men know that love makes them into idiots, some will still turn around and fall madly in love. He ponders how his friend and fellow soldier Claudio has turned from a plain-speaking, practical soldier into a moony-eyed lover. Benedick muses that it is highly unlikely that he himself will ever fall in love. Unless...

With:
Woodrow Proctor as Benedick

WOODROW PROCTOR (Benedick) spent the summer of 2019 preparing for and then performing in Franklin Stage’s Billy Bishop Goes to War. He’s very happy to be back at work with the team at Franklin Stage during these uncertain times. Woodrow has appeared in numerous Shakespeare productions with the Saratoga Shakespeare Company and the Alabama Shakespeare Festival. More recently he has performed with the Arts Center of Coastal Carolina and at Luna Stage in West Orange, New Jersey.

PATRICIA BUCKLEY & LESLIE NOBLE (Producers) have been the Executive Artistic Directors at the Franklin Stage Company since 2017 where they have produced and presented productions such as Arthur Miller's The Price, A Walk in the Woods, Doubt, Billy Bishop Goes to War and Possessing Harriet. They have hosted a variety of artists from various disciplines in Chapel Hall such as Annie Lewandowski, Stephan Wolfert and Erin Layton.

TOM BERGIN (Video) started his career recording audio for CBS News, specializing in fast-moving, documentary-style journalism. He has since worked on many documentary features, including An Inconvenient Truth and My Architect, as well as projects for Public Policy Productions and Maysles Films. Tom traveled the world to record Not My Life (human slavery) and A Closer Walk (AIDS). He has recorded all of the behind-the-scenes footage for Lin-Manuel Miranda’s forthcoming In the Heights.

CHRIS O’CONNOR (Associate Producer) is Artistic Director of Mile Square Theatre in Hoboken, NJ. Last year, Chris directed FSC’s production of Billy Bishop Goes to War. He received a 2017 Award of Excellence from the New Jersey Theatre Alliance. He produces MST's annual 10-minute play festival 7th Inning Stretch and has directed over 20 productions at MST. He has directed at theatres and universities all over America, and his recent work at MST includes I and You, Betrayal, Circle Mirror Transformation, and the world premiere of Long Gone Daddy. Chris is Assistant Professor in Theatre Arts at Molloy College/CAP21 and is currently serving as Interim Chair.

SCOTT HOLDREDGE (Production Design) is excited to be back with FSC this summer. He is currently full-time faculty at SUNY Cortland. His most recent work at SUNY Cortland was Scenic Designer on Lysistrata, Head Over Heels and Curious Incident of the Dog in The Nightime. Scott has also worked for Syracuse Opera, Syracuse University, and Unatego High School theaters as their set/lighting designer and technical director. Scott has worked in NYC, LA, and San Diego in theater, corporate events, theme parks, haunted houses and film.

ISABELLA HOTCHKIN (Production Assistant) is a Sophomore at Franklin Central School. She loves photography, film, poetry, and theater. Bella was an intern for FSC’s 2019 season and came back for more! She has been involved in many Drama productions at her school and operates lights and other tech there. She is very excited to be working at the stage again this year.

I do much wonder that one man, seeing how much
Another man is a fool when he dedicates his
behaviors to love, will, after he hath laughed at
such shallow follies in others, become the argument
of his own scorn by falling in love—and such a man
is Claudio.I have known when there was no music
with him but the drum and the fife, and now had he
rather hear the tabor and the pipe. I have known
when he would have walked ten mile afoot to see a
good armor, and now will he lie ten nights awake,
carving the fashion of a new doublet. He was wont to
speak plain and to the purpose, like an honest man
and a soldier, and now is he turned orthography; his
words are a very fantastical banquet, just so many
strange dishes. May I be so converted and see with
these eyes? I cannot tell; I think not. I will not
be sworn but love may transform me to an oyster; but
I’ll take my oath on it, till he have made an oyster
of me, he shall never make me such a fool. One woman
is fair, yet I am well; another is wise, yet I am
well; another virtuous, yet I am well; but till all
graces be in one woman, one woman shall not come in
my grace. Rich she shall be, that’s certain; wise,
or I’ll none; virtuous, or I’ll never cheapen her;
fair, or I’ll ever look on her; mild, or come not
near me; noble, or not I for an angel; of good
discourse, an excellent musician, and her hair shall
be of what color it please God. Ha! The Prince and
Monsieur Love! I will hide me in the arbor.

Give to "The Hat"

Franklin Stage Company is a free theater that depends on the generosity of our audience—any amount is appreciated! 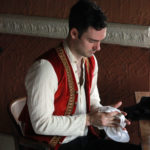 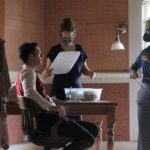 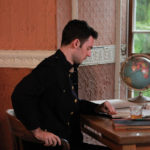 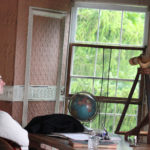 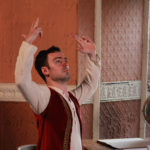 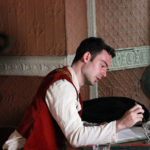