William Shakespeare’s comedy is the story of best friends, Proteus and Valentine, who travel far from home and then happen to fall in love with the same woman, although one of them is already sworn to a girl back home. In this 6-person adaptation by Fiasco Theater, this early play by the Bard’s highlights the price of friendship, the cost of betrayal, how to find true love, and the limitations of man’s best friend.

MATT BITTNER (Valentine/Crab/Original Music and Sound Design) is an actor, musician and sound designer who will be originating the role of Larry Fellows in the upcoming Broadway premier of Almost Famous: The Musical, book/lyrics by Cameron Crowe and original music/lyrics by Tom Kitt. Other select acting credits include the Tony nominated revival of Present Laughter, starring Kevin Kline (Broadway), School of Rock: The Musical (National Tour, Broadway), and productions with La Jolla Playhouse, The Public, and The Old Globe.

WOODROW PROCTOR (Proteus) appeared previously at Franklin Stage for its 2019 production of Billy Bishop Goes to War.  He has also appeared in a number of roles as a member of Actors Equity at theaters such as the Alabama Shakespeare Festival, Saratoga Shakespeare, Luna Stage Company and the Arts Center of Coastal Carolina. You may also have caught him on several episodes of The Food that Built America. When not performing Shakespeare, Woodrow spends his day developing virtual reality software in the hopes of finding new ways to blend the newest and oldest methods of storytelling. Woodrow’s last theatrical performance closed in early March of 2020. He would like to express his gratitude and appreciation for the perseverance of the theatrical community in the face of so much difficulty. Most of all, he would like to thank his fiancé for her love, dedication and support.

KELSEY ROBERTS (Julia) is thrilled to be joining Franklin Stage Company this summer!  Originally from Chicago, she is now a New York City-based actor.  She has previously been seen at Mile Square Theatre (A Merry Little Christmas Carol and Five Times in One Night) and Syracuse Stage (Mary Poppins and Hairspray).  She’s a proud graduate of Syracuse University and thanks her friends and family for their endless love and support.

SARAH TODES (Lucetta/Silvia) is an actor, writer, and creator of production company NEON CAVIAR. She is a proud MOME/NYFA Women’s Fund recipient for her dark comedy, GAMP; watch the trailer at gwenandmina.com. Sarah’s next project, Lemons, will be at The Bushel Collective in Delhi July 23rd and 24th. She is also the founder of the New York Times acclaimed Brooklyn-based children’s theater company, Puppetsburg. neoncaviar.com/ puppetsburg.com.

DREW KAHL (Antonio/Lance/Duke) is happy to return to Franklin Stage where he has directed and performed in staged readings, and, in 2013, appeared as Leontes in A Winter’s Tale. Regional acting credits include productions with Chenango River Theatre, Everyman Theatre, Roundhouse Theatre, Arena Stage, Rep Stage, The Shakespeare Theatre and The Shakespeare Project. He teaches acting, directing, and voice production at SUNY Oneonta, serving as the current Chair of the Theatre Department. Drew is a Certified Associate Teacher of Fitzmaurice Voicework and a proud member of Actors Equity, SAG/AFTRA, and the Voice and Speech Trainer’s Association (VASTA).

CHRIS O’CONNOR (Director) is Artistic Director of Mile Square Theatre in Hoboken, NJ. He received a 2017 Award of Excellence from the New Jersey Theatre Alliance. He produces MST’s annual 10-minute play festival 7th Inning Stretch and has directed over 20 productions at MST. He has directed at theatres and universities all over America. His recent work at MST includes I and You, Betrayal, Circle Mirror Transformation, and the world premiere of Long Gone Daddy. As an actor, Chris has performed in such theatres as Maltz Jupiter Theatre, FSC, Seattle’s A Contemporary Theatre, The Culture Project, Soho Rep, Center Theatre Group, Gloucester Stage, Provisional Theatre of Los Angeles, The Bathhouse Theatre, Seattle Children’s Theatre, and City Theatre in Pittsburgh.

SCOTT HOLDREDGE (Set Design/Lighting Design/Technical Director) is excited to be back with FSC this summer. He is a full time faculty member and design program coordinator at SUNY Cortland in NY. He recently returned to Anchorage Opera as Lighting Designer for Tosca.  As a response to Covid protocols at Franklin Stage Company, he designed and built an indoor and outdoor stage for last year’s season including African drummer Kwaku Kwaakye Obeng, Dr KABOOM! and A Doll’s House pt2. His designs for SUNY Cortland have included; Company, Lysistrata, Head Over Heels, Curious Incident of a Dog in the Night-time, The Children’s Hour, Dangerous Liaisons, Annie Get Your Gun, 9 to 5, Top Girls and Little Women.   At Cortland Repertory Theatre, he has designed productions of Footloose and The Velveteen Rabbit. He has also worked for Syracuse Opera, Syracuse University, and a few area high school theatres as a set/lighting designer and technical director. Scott’s work has been seen in New York City, Los Angeles, Alaska, and San Diego across the genres of theatre, corporate events, theme parks, haunted houses and film.

GRANT CROWSON (Stage Manager) is a student in stage management at Ithaca College. Grant has been involved with local theatre in many ways through his HS work at Cooperstown High School and work with area theater companies. He focuses on stage managing but also enjoys set building, lighting design, and everything in between.He is very excited to work with FSC this summer and looks forward to building relationships with the entire company! 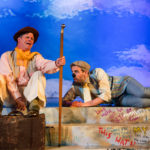 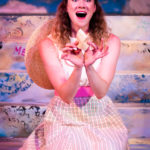 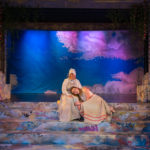 Sarah Todes as Lucetta and Kelsey Roberts as Julia.
Photo by Russ Rowland 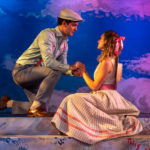 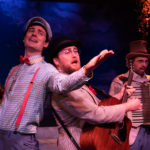 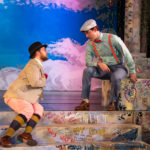 Brian Ott as Thurio and Woodrow Proctor as Proteus.
Photo by Russ Rowland.