“As a practice I make my larger sculptures directly and intuitively. But from time to time, I find myself working out some of my ideas at a smaller scale in a variety of materials: paperboard, wood, cloth, and anything else I have at hand.  The constructions in this show are part of that group of maquettes. These “drawing” exercises, allow me to work with more immediacy in exploring forms and structures and thinking through ideas. Most of these studies are left as is but some, as in this exhibit, have been further developed at the smaller scale in metals and epoxy. ” –Richard Friedberg

Born in 1943, and raised in Baltimore, Maryland, Richard Friedberg attended Antioch College and Yale University. In 1968, the artist moved to New York City to make sculpture and teach Fine Arts at Hunter College. His first one-man show occurred the following year at the Tibor de Nagy Gallery and his work has been shown in galleries throughout the United States and Europe. In addition to Hunter College, Richard has taught at the California Institute of the Arts and at Fairleigh Dickinson University.

Mr. Friedberg lives and works at his studio in Upstate New York. 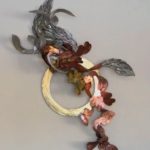