Winner of the 2005 Pulitzer Prize and Tony Award

In this brilliant and powerful drama, Sister Aloysius, a Bronx school principal, takes matters into her own hands when she suspects the young Father Flynn of improper relations with one of the male students.

How splendid it feels to be trusted with such passionate, exquisite ambiguity unlike anything we have seen from this prolific playwright so far. Blunt yet subtle, manipulative but full of empathy for all sides, the play is set in 1964 but could not be more timely. In just ninety fast-moving minutes, Shanley creates four blazingly individual people. DOUBT is a lean, potent drama…passionate, exquisite, important and engrossing. —NY Newsday

A beautifully balanced drama. Shanley is a writer working at the top of his craft, making the most of a muted but evocative palette in the pursuit of truth’s shadows. Here, for the first time in a long time, is a play that is about something. —Chicago Tribune

“An eloquent and provocative investigation of truth and consequences. A gripping mystery, tightly written.” —Time Out NY.

Adara Alston (Mrs. Muller) is delighted to make her FSC debut. Some of her local credits include TO KILL A MOCKINGBIRD (Calpurnia) and THE CRUCIBLE (Ann Putnam) with Ti-Ahwaga Community Players, SHREK THE MUSICAL (Donkey) with Afton Community Theatre, and VIEUX CARRE (Nursie) with Know Theatre. Adara had her original one-act play DO OR DON’T DO premiere at Know Theatre in November, and she performs as a drummer and Co-Drum Major in Broome County Celtic Pipes & Drums.

Bianca Boller (Stage Manager) is a Queens-based stage manager who recently finished an apprenticeship at The Juilliard School. During her time there she worked on a number of plays, dance shows, and an opera. Her other credits include This Day Forward (Vineyard Theatre), Where Did We Sit on the Bus? (Ensemble Studio Theatre), Alexander Who’s Not Going to Move (Two Beans Productions), New Kid (Syracuse Stage) and P.Y.G.(New York Theatre Workshop). Bianca is happy to working at Franklin Stage Company for the summer.

Jacob Glueckert (Sound Design) has had an interest in theatre from a young age, and is currently studying Sound Recording Technology at Ithaca College. Jacob is happy to be returning to FSC where he was an intern for five years, working everywhere from onstage as an actor in Prometheus, An Enemy of the People and King Lear, to the tech booth and scene shop. An avid drummer, Jacob is also a member of an Ithaca-based jazz trio 27 Lives.

Scott Holdredge (Lighting Design/Technical Director) is excited to be back with FSC this summer! He is currently full time faculty at SUNY Cortland.  His most recent work at SUNY Cortland was Scenic Designer on 9 to 5, Top Girls and Little Women. Scott has also worked for Syracuse Opera, Syracuse University, and Unatego High School theaters as their set/lighting designer and technical director. Scott has worked in NYC, LA, and San Diego in theater, corporate events, theme parks, haunted houses and film.

Marjorie Kellogg (Scenic Design) is happy to be working with FSC. Her Broadway credits include ANY GIVEN DAY, the George C. Scott revival of ON BORROWED TIME, LUCIFER’S CHILD, starring Julie Harris, AMERICAN BUFFALO with Al Pacino, DA, REQUIEM FOR A HEAVYWEIGHT, A DAY IN THE DEATH OF JOE EGG, SOLOMON’S CHILD, ARSENIC AND OLD LACE, STEAMING and THE BEST LITTLE WHOREHOUSE IN TEXAS.  Designs for Circle in the Square include SPOKESONG, HEARTBREAK HOUSE and PRESENT LAUGHTER. Off-Broadway, Ms. Kellogg has worked for the New York Shakespeare Festival’s Public Theatre, the Signature Theatre, the Second Stage, the Manhattan Theatre Club, Playwrights Horizons and the Roundabout Theatre, among others. She received Theatre Development Fund’s 2014 award for Sustained Excellence in Scenic Design, the 2006 Distinguished Achievement in Scenic Design from USITT, the 2002 Ruth Morley Design Award, the 1995 Mary L. Murphy Award for Excellence in Design, and shared the first Michael Merritt Award for Design and Collaboration in 1994.

Kristi McKay (Costume Design) is a native Central New Yorker with a rich and varied background in theater arts.  She began her theatrical career as the resident costume designer for the Merry-Go-Round Playhouse in Auburn, NY, designing over 30 productions. In 1989 she took an administrative turn at Le Moyne College where she served 10 years as General Manager of the Coyne Performing Arts Center as well as occasional costume designer, graphic designer, and campus-wide artistic consultant.  Kristi is currently the Director of Administration at Solving Kids’ Cancer, a Manhattan based charity.

Laura Menzie (Sister James) is thrilled to be making her debut at FSC.  Most recent credits include “We Are Proud to Present…” (Stages Repertory Theatre), The Sonic Life of a Giant Tortoise (Horsehead Theatre Company), Richard III (Houston Shakespeare Company), Brilliant Traces (Brown Box Theatre Project) and Vanya and Sonia and Masha and Spike (Nina) with Pendragon Theatre.  She has appeared with The Great War Theatre Project in the UK and has devised theatre in Mexico with Icaro Teatro.  Laura has also participated for three summers with Brown Box Theatre Projects Free Shakespeare on the Beach tour.  She grew up in the Hudson Valley and recently graduated with her MFA from the University of Houston. 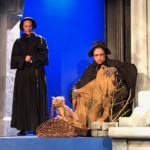 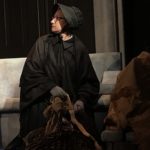 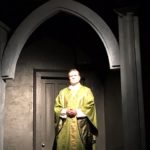 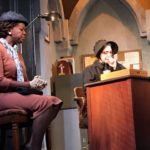 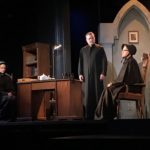 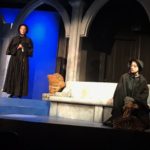